Details about Colin Trevorrow’s “Star Wars: Episode IX,” the intended original version of the last film of the Skywalker saga before it was scrapped and J.J Abrams’ “Star Wars: The Rise Of Skywalker” ultimately emerged from its ashes, have apparently leaked online.

The details come from a comprehensive breakdown of Trevorrow and Derek Connolly’s script that appeared on Reddit, but unlike most movie talk on Reddit – this appears to be genuine and hails from celebrated filmmaker, DVD producer, and YouTuber Robert Meyer Burnett. At the same time, The Playlist say they have confirmed its authenticity with multiple sources.

The film’s original title is “Star Wars: Duel Of The Fates” and it begins with The First Order having cut off all communication between planets to suppress a rising rebellion inspired by Luke’s stand at the Battle of Crait. The Resistance’s mission is to re-open communication and call the galaxy to war.

The opening sequence of the film is set at the Kuat Shipyards and sees Finn, Rose, and BB8 steal a Star Destroyer full of old Imperial weapons and vehicles. During this heist Finn sees a fallen Stormtrooper without his helmet on and recognizes him. As a result, his internal conflict when it comes to killing his former brothers and sisters in arms is reignited.

Kylo Ren is missing as far as now Chancellor Hux is aware, but a now stubbled Kylo is on Mustafar and haunted by Luke’s force ghost. In Vader’s Temple, Kylo finds a hologram recording of Palpatine with a message for Vader – If Luke kills Palpatine, Vader is to take Luke to the Remnicore System to see Palpatine’s teacher Tor Valum.

The Holocron detects Kylo isn’t Vader and explodes in red lighting, burning him in the process – Leia force senses it just as the Kuat team return with their stolen Star Destroyer. Rey is still having nightmares involving her connection to Kylo, but in her researching Luke’s old Jedi texts she learns of a ‘Force Beacon’ – a hidden communication system from the Old Republic that can send a signal to 50 planets and call them to war – a signal the First Order can’t stop. The problem? Said system is under the Jedi Temple on a now enemy-occupied Coruscant.

Force ghost Luke appears as Rey trains, pushing her to get stronger, while Kylo makes it back to Coruscant and confronts Hux before heading off again after picking up and then throwing Vader’s mask off a balcony – his devotion to the man shattered. He confronts the 7000-year-old Tor Valum and begins training with him.

The Resistance splits into two missions. The first has Rey, Poe and Chewbacca going to the planet Bonadan to find guidance for Rey. The second team is Rose, Finn, R2 and 3PO who set out to activate the force beacon.

The first team, pursued by the Knights of Ren, reach Bonadan where a Seer manages to extract a star chart out of Rey’s mind from her visions with Kylo. The Knights of Ren show up and fight Rey in a lightsaber battle.

The second team succeed at igniting the beacon, but the First Order soon cut it off and force them to flee into Coruscant’s underbelly. The pair are captured and sent to a POW camp where Rose is interrogated by Hux. Eventually, they escape with Finn having recruited defecting Stormtroopers to fight back.

Rey and Kylo eventually get to Mortis and battle when it’s ultimately revealed Kylo killed Rey’s parents at the behest of Snoke. Towards the end attempts are made to save Ben, but are unsuccessful and he is ‘extinguished’.

Leia brings her forces to Coruscant to battle the First Order with fighting in space and on the ground. Chewie flies an X-Wing at one point. The film ends with Finn and Rose taking all the Force-sensitive youth to a remote planet so Rey can train the next generation of Jedi including ‘Broom Boy’.

A full breakdown of the script is up at Reddit.com
Hacer clic para expandir...

The final Rotten Tomatoes score for “Star Wars: The Rise of Skywalker” has been settled and the J.J. Abrams-directed film appears to have sunk further. With 471 reviews counted, the film sits at 52% – dropping below “Star Wars: Episode I – The Phantom Menace” to become the worst-reviewed...

A peek into the movie that will never be.

Ford weighed in on the online debate over whether Han Solo returned as a Force ghost, since the character was not a Jedi or overly Force sensitive. 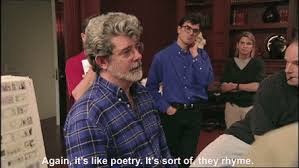